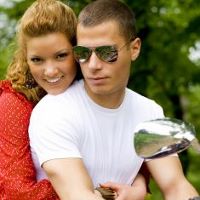 Cindy and Alicia, both seventeen, walked out of the mall after a fun afternoon of shopping. Just as they reached Cindyâ€™s car in the parking lot, two young men drove by on motorcycles. One of them knew Cindy from school, so they stopped to talk.

After a few minutes of casual chatter, one of the young men asked Alicia if sheâ€™d like a ride on his bike.

â€œNo,â€ she said, laughing. â€œMy dad would kill me if he knew I was riding on a motorcycle.â€

â€œAh, come on,â€ he teased. â€œYou’re a big girl and no oneâ€™s gonna know. Iâ€™ll just take you around the mall one time.â€

Cindy joined in, urging her friend to have some fun. Alicia finally relented, and swung up on the back of the bike. Pressing up against the young man, she held on tightly as he twisted the throttle and roared away.

Thatâ€™s when three neurochemicals took over Aliciaâ€™s mind and body.

Dopamine, the reward hormone, kicked in immediately, bathing her in a wave of pleasure. â€œCute guy. Seems to like me. Great body. This is so much fun!â€

Twenty seconds after Alicia pressed her body against his and felt his bare arms touch hers, a burst of oxytocin was released into her blood stream. This is the bonding hormone. It creates feelings of trust, safety, commitment, exclusivity. â€œCould this be the guy Iâ€™ve been dreaming about all my life?â€

As the motorcycle picked up speed and made a few sharp turns, a third neurochemical infused her body: adrenalin. The fight-flight hormone. It’s triggered when we sense risk or danger. It increases our heart and respiratory rate, tightens our muscles, and prepares us for intense physical action.

It also magnifies the effects of the other two neurochemicals that were flooding Aliciaâ€™s body. â€œWow, Iâ€™ve never felt this way before!â€

In the time it took to circle the mall, Aliciaâ€™s mind had been reprogrammed. â€œThis is it. Heâ€™s the one. The guy Iâ€™ve always wanted. I feel so good when Iâ€™m with him. Iâ€™ve got to see him again!â€

That night as she tossed sleepless in bed, she built a fantasy future around this stranger. The more she thought about him, the more convinced she was that she couldnâ€™t live without him.

But the next morning Cindy called. â€œHey, Alicia. You know that guy you met yesterday? Stay clear of him. I found out he was kicked out of school for doing drugs. Heâ€™s had a whole string of girlfriends, two of whom got pregnant. He canâ€™t hold a job, and he beat up one of his closest friends a few weeks ago. Heâ€™s bad news, babe, so stay away from him.â€

Alicia was shocked as fantasy collided with reality. Reality said, â€œHeâ€™s bad and heâ€™s dangerous, and I need to stay clear.â€ Fantasy, fueled by dopamine, oxytocin, and the deceitfulness of our sinful nature, said, â€œThat canâ€™t be true; he was so nice to me. And even if it was true, heâ€™d never be like that with me. I just know with us it will be different.â€

We all know an Alicia. She may be your daughter, or the daughter of a friend or relative. Maybe itâ€™s a teen in your youth group. They are everywhere.

And most of them know virtually nothing about the three neurochemicals that can hijack their brains within seconds of meeting a cute guy.

You can change this. You can help to educate the teens in your life, so they understand the marvelous complexity as well as the dangerous potential of the neurochemicals and hormones that impact their thinking, emotions, and life-changing decisions.

How? Give them a copy of a book entitled, Hooked: New Science on How Casual Sex is Affecting Our Children, by Joe McIlhaney and Freda McKissic Bush, both of whom are medical doctors.

This book (available through Amazon.com) is written entirely from a medical perspective. It describes the design and dynamics of our neural and hormonal systems in simple language that a teen can understand. It also contains numerous testimonies from teens who describe the emotional pain caused by casual sex:

â€œI wish I had said no. I wish I had been strong enough, and I wish my parents had helped me more. I had no idea that having sex would change my life so much.â€ Karen, 20

The book contains no Bible quotations or references, so it can be used in any setting. My guess, however, is that both authors are Christians, since the principles they teach line up squarely with biblical morality. Over and over again this book echoes the simplest principle of physical and sexual engagement: â€œDo not awaken love until it is readyâ€ (Song of Solomon).

After my nineteen-year-old son read the book earlier this year, he said, â€œDad, even if I wasnâ€™t a Christian and had no moral convictions on sexuality, this book would persuade me to not even hold a girlâ€™s hand during early dating, and certainly not to have any sexual intimacy until marriage.â€

This summer would be a good time to give this book to your teens â€¦ better yet, to read this book with your teens.

Summer Blog Schedule: To allow more time with my family this summer, I will be doing one blog post a week rather than two.