The Slippery Slope of Conflict

Staying on Top of Conflict

Even good desires can evolve into controlling demands that can lead us to judge others and then avoid or punish them until we get what we want. This progression often starts with minor differences, but before we know it we’re sliding down a slippery slope of conflict that can drop off in two directions. 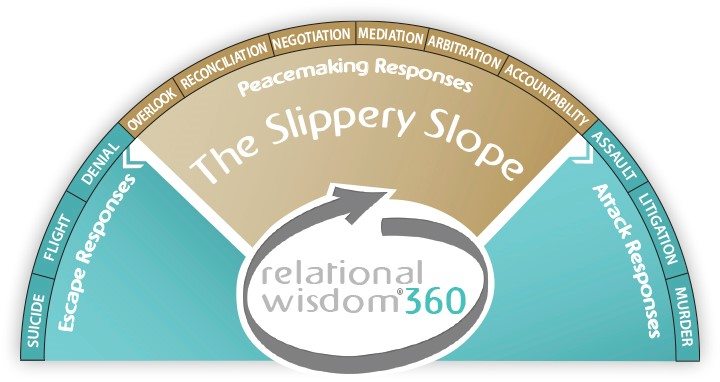 People tend to use escape responses when they are more interested in avoiding unpleasant people or situations than in resolving differences.

Denial—One way to escape from a conflict is to pretend that a problem does not exist. Another way is to refuse to do what should be done to resolve a conflict properly. These responses bring only temporary relief and usually make matters worse.

Flight—Another way to escape from a conflict is to run away. This may take the form of pulling away from a relationship, quitting a job, filing for divorce or changing churches. Flight is legitimate in extreme circumstances (such a abuse), but in less severe cases it only postpones a proper solution to a problem.

Suicide—When people lose all hope of resolving a conflict, they may seek to escape from the situation (or make a desperate cry for help) by attempting to take their own lives. Suicide is never a right way to deal with conflict.

People tend to use attack responses when they are more interested in controlling others and getting their way than in preserving a relationship.

Assault—Some people try to overcome an opponent by using various forms of force or intimidation, such as verbal attacks (including gossip and slander), physical violence, or efforts to damage a person financially or professionally. Such conduct always makes conflict worse.

Litigation—Although some conflicts can only be resolved by taking them before a civil judge, lawsuits usually damage relationships and often fail to achieve complete justice.

Murder—In extreme cases, people may be so desperate to win a dispute that they will try to kill those who oppose them. While most people would not actually kill someone, we sometimes murder others in our hearts by harboring anger or contempt against them.

Peacemakers are people who breathe grace. They use love, mercy, forgiveness and wisdom to dissipate anger, improve understanding, promote justice and model repentance and reconciliation.

There are three ways to resolve conflicts personally and privately, just between you and the other party.

Overlook an Offense—Many disputes are so insignificant that they should be resolved by quietly overlooking an offense. Overlooking an offense is a form of forgiveness, and involves a deliberate decision not to talk about it, dwell on it or let it grow into pent-up bitterness or anger.

Reconciliation—If an offense is too serious to overlook or has damaged our relationship, we need to resolve personal or relational issues through confession, respectful correction and forgiveness.

Negotiation—Even if we successfully resolve relational issues, we may still need to work through material issues related to money, property or other rights. This should be done through a cooperative bargaining process in which you and the other person seek to reach a settlement that satisfies the legitimate needs of each side.

When a dispute cannot be resolved personally, it is wise to seek assistance from others.

Mediation—If two people cannot reach an agreement in private, they should ask one or more objective outside people to meet with them to help them communicate more effectively and explore possible solutions. These mediators may ask questions and give advice, but the parties retain the responsibility of making the final decision on how to resolve their differences.

Arbitration—When you and an opponent cannot come to a voluntary agreement on a material issue, you may appoint one or more arbitrators to listen to your arguments and render a binding decision to settle the issue.

As you can see, the escape responses only postpone a proper solution to a problem, and attack responses usually damage relationships and make conflicts worse. Therefore, you should generally try first to deal with conflict personally and privately by using one of the first three peacemaking responses (overlooking, discussion, or negotiation).

If repeated efforts at personal peacemaking do not resolve a matter, then you may need to pursue one of the other conciliation responses (mediation, arbitration, or accountability), which will require the assistance of other people in your organization or community.

Adapted from The Peacemaker, © 2004 by Ken Sande. All Rights Reserved.