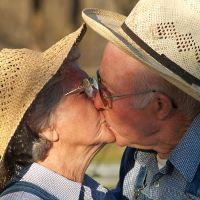 Years ago I completed a particularly sad divorce mediation. The husband had tried for years to meet his wife’s expectations, but she was adept at finding fault with everything he did.

Shortly after our final meeting, I read an article in Country Magazine in which M.G. Creight described her husband with wonderfully warm and admiring words. I couldn’t help but imagine how differently my divorce client would have described Mr. Creight, had she been his wife instead.

To give you a glimpse of the difference between these two women, here are the actual words Mrs. Creight wrote about her husband, contrasted with the kind of words (indented italics) that my client would have probably used to describe the same man.

“He exudes the strength and perseverance of a man; other times he is a fun-loving boy. Usually he’s a combination of the two, the best of both.”

I don’t know how much longer I can stay married to this man. Sometimes he’s so childish it embarrasses me!

“His habitat is the out-of-doors, with brief refueling stops at the kitchen table.”

He’s always working, so we don’t spend much time together—except when he plunks down at the dinner table and expects me to feed him.

“His britches in winter are shapeless cords, the kind that go whoop, whoop when he walks. In summer, his jeans are faded, the knees more so.”

I can’t stand the way he dresses. He has no taste at all for proper fashion, and he’s always walking around in worn-out clothes.

“He’s more concerned with the contents of his pockets than the label on the back one. Those pockets hold an amazing collection of useful things: tape, bolts, wire, a pocketknife and maybe a length of baling twine. With them, he can tame an unruly machine or critter, mend a broken fence, remove a stone from a sore hoof, graft a tree, even patiently coax a reluctant calf from its mother’s womb.”

His pockets are always filled with junk that I just can’t get him to throw away. It’s embarrassing when we’re shopping and he reaches into his pockets for change and has to pile all his junk on the counter.

“He concentrates on things that grow … digging, planting and tending the earth … and the earth responds to his husbandry.”

His hands are always dirty. I’ve told him a hundred times not to touch me until he’s washed. Fortunately, he finally got the message and learned to keep his distance.

“He knows the woods, fields, and the bog where the deer hide on hot summer afternoons. Then there’s the hidden stream where silver minnows flash. He’ll take you with him and show you. There’s no need to ask—just tag along when he leaves.”

Just when I need him, he’s wandered off somewhere. He gets absorbed in his frivolous hobbies when he should be inside helping with household duties.

“This country cupid may not attend many opening nights with you. But he will wake you early and point to a magnificent sunrise.”

I can’t ever get him to take me out, even for the opening night of a special movie or play. And when I go out myself and want to sleep in the next morning, he still gets up early and has the nerve to wake me to see the sun come up.

“He may not send you roses. But he will plant a bush of fragrant ones near the kitchen window without telling you.”

I can’t remember the last time he did anything romantic, like sending me roses. All he thinks about are the plants in his yard.

“Anniversary dates he may not remember. He lives by the season, not the calendar. In spring, the first dog-toothed violets will appear long before you noticed them … all the better to surprise you with a bouquet of them lying nestled in his hat, carefully wrapped in a scrap of damp moss, on the bench by the back door when you go out to sweep the porch.”

He forgets our anniversary half the time, and rarely buys me a gift. Then he can’t understand why I’m not excited about some wilted violets he picked from the yard and just left on the porch.

“He’s a country valentine, and a country girl wouldn’t have him any other way.”

He just doesn’t understand what a woman needs. I’ve tried to be patient, but I deserve better than this. I can’t help but dream of trading him in on a man who knows how to love a woman.

Exactly the same man, but seen through very different eyes … eyes that have been programmed by two very different worldviews and their resulting beliefs and values.

What kind of eyes do you have for the people around you?