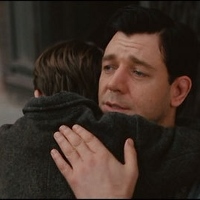 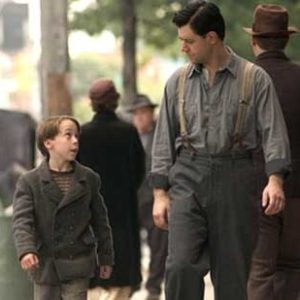 Cinderella Man is packed with examples of relational wisdom. Russell Crowe plays the part of a real life hero named James J. Braddock. Once a successful heavyweight boxer, Braddock was reduced to poverty by a broken hand and the Great Depression.Â  After losing their home, he and his family were forced to live in a rundown, one-room basement apartment. Like so many other men, he went out every morning desperately looking for work so he could bring his wife enough money to buy food for the next meal.

In the clip you will watch below, he is returning home empty-handed. He knows his family will go to bed hungry once again. He is greeted by even worse news: his son has been stealing food. In spite of all the frustrations he must be feeling , he responds to his son with remarkable self control and empathy.

As you watch this scene, pay careful attention to the relational dynamics and emotional cues. Try to imagine how discouraged and powerless this man must feel. Watch Russell Croweâ€™s body language and posture. Listen to his tone of voice. Note his facial expressions. Pay attention to his use of pronouns; why is his switch from second person singular (“you”) to first person plural (“us” and “we”) so significant? Draw on his example to improve your own ability to discern emotions, desires, and needs in yourself and others, and to respond to them in constructive ways.

As you watch this clip, be sure to click the full screen icon in the lower right corner of the movie screen so you can better see the subtle body language and emotional cues of this moving exchange. (If screen does not appear, click here.) Crowe portrays a father who understands and restrains his own emotions, even in a highly stressful situation (self-aware and self-engaging). When he learns his son has stolen, he resists the temptation to jump to conclusions and give in to pride and anger (â€œHow could you do this to us? Youâ€™ve disgraced our family! Iâ€™ll teach you not to steal!â€).

By patiently holding his tongue, he sends his son the message that it’s safe to open his heart and reveal the reasons behind his actions (other-aware). In doing so, Crowe models one of the most appealing qualities God has built into us as his image-bearers: “love is patient and kind” (other-engaging).

Crowe demonstrates marvelous self-control throughout the scene. When he learned the reason for his son’s stealing, his body language revealed a deep inner agony. He looked up and down the street, suppressing a scream of anger and frustration, not at his sonâ€™s behavior, but at a world that was crushing his family and at his own inability to provide for those he loves (more self-awareness and engagement).

Crowe went from standing erect, to leaning over, to kneeling as he spoke to his son. This reduced physical intimidation and drew them closer to each other, both physically and emotionally (other-engagement).

More importantly, his posture physically illustrated the difference between law and grace. As he spoke â€œthe lawâ€ to his son (â€œWe donâ€™t stealâ€), he was still above him, but when he spoke grace (â€œI promise we will never send you awayâ€), he was kneeling so low that his eyes were actually beneath his sonâ€™s, persuasively communicating humility, kindness, and love (superb other-awareness and other-engagement, which continues throughout this scene).

Crowe moved smoothly from second person singular (â€œyouâ€) to the first person plural (â€œweâ€ and â€œusâ€). In doing so, he sent the clear message, â€œYou are not excluded from my heart or love; we are a family and we are in this together.â€

His tone of voice consistently conveyed gentleness and respect. He was firm but his words were not fashioned to sting and punish. He spoke the truth directly yet kindly, reminding his son of their familyâ€™s shared values and dignity, and inviting him to demonstrate responsibility and reclaim his place in that circle with a simple promise. A superb illustration of Proverbs 12:18: “There is one whose rash words are like sword thrusts, but the tongue of the wise brings healing.”

Crowe brought healing by conclusively resolving the burning issue in his son’s heart, the fear of being sent away for lack of food. Demonstrating excellent other-engagement, he gave a simple but life-changing promise, which echoes Godâ€™s covenant with us, â€œI will never leave you nor forsake youâ€ (Heb. 13:5).

Crowe choked up as he made his promise, reinforcing his words with subtle yet convincing emotional cues. He communicated love, forgiveness, and commitment with his words, tone of voice, eyes, facial expression and posture; he used every means God had given him to reach his son’s mind and heart and to reassure him of his complete restoration (compelling other-awareness and engagement).

Sensing the genuineness and safety of his father’s love and forgiveness, his son burst into tears from sheer relief and threw himself into his fatherâ€™s arms. In a perfect climax, this wise and loving father embraced his son, lifted him up, and reassured him with these compassionate and redeeming words, â€œItâ€™s OK, kid. You got a little scared. I understand.â€

This little movie clip is only three minutes long, and yet it is packed with lessons on relational wisdom. So don’t just watch this clip; learn from it. No matter how relationally clumsy your are today, by God’s grace you can develop, little by little, the same relational skills that Russell Crowe demonstrates in this brief but life-changing interaction.

Here are some questions and exercises you can use to start this process right now (you’ll get even more from them if you discuss them with a friend or in a group). 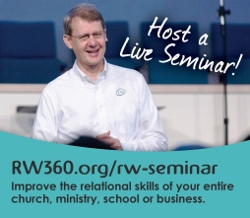 Bring Relational Wisdom into Your Church, Ministry or Business

Would you like to see your entire congregation or staff develop the the kind of relational skills describe above? If so, click on the image to the right to learn more about how you can host a live, one-day seminar on relational wisdom.