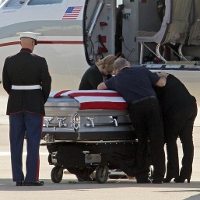 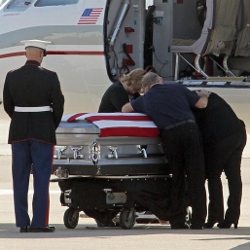 This true story from an airline pilot about a fallen soldier’s journey home illustrates a the importance of always being alert to opportunities to show kindness to other people. Here is what the pilot wrote.

My lead flight attendant came to me and said, “We have a fallen soldier on this flight.”

“Is there an escort?” I asked.

“Please tell him to come to the Flight Deck.” I responded. “You can board him early.”

A short while later a young army sergeant entered the flight deck. The first officer and I got up to shake his hand and thank him for his service.

About 30 minutes into our flight, I received a call from the flight attendant.

“I just learned that the family of the soldier we are carrying is also on board,” she said. His father, mother, wife and daughter were escorting their son, husband and father home.

The flight attendant told me that the family was grieving because they had not been able to see the container that the soldier was in before we left. They had asked if there was any way they could be outside by the cargo door to watch the soldier being taken off the airplane.

I could hear the desperation in the flight attendant’s voice when she asked me if there was anything I could do. “I’m on it,” I responded.

I contacted my flight dispatcher on a secondary radio and explained the situation. He said he understood and he would get back to me. Shortly before we landed, he sent the following message via an on-board email system:

“Captain, sorry it has taken so long to get back to you. I had to confirm some details. Upon your arrival a dedicated escort team will meet the aircraft. The team will escort the family to the ramp and plane side. A van will be used to load the remains with a secondary van for the family.

“The family will then be escorted into the terminal where the remains can be seen on the ramp. It is a private area for the family only. When the connecting aircraft arrives, they will be escorted onto the ramp to watch the remains being loaded for the final leg home.

Captain, most of us here in flight control are veterans. Please pass our condolences on to the family. Thanks.”

I sent a message back, thanking flight control for a good job. I printed out the message and gave it to the flight attendant to pass on to the family. She was very thankful and told me, “You have no idea how much this will mean to them.”

After landing, we cleared the runway and taxied to the ramp area. The ramp is always a busy area with aircraft maneuvering every which way to enter and exit, but the ramp controller told me that all traffic was being held for us.

It looked like it was all coming together, but then I realized that once we turned the seat belt sign off, everyone would stand up at once and delay the family from getting off the airplane. So I stopped the aircraft short of the gate and pushed the public address button.

“Ladies and gentleman, this is your Captain speaking. I have stopped short of our gate to make a special announcement. We have a passenger on board who deserves our honor and respect. His name is Private xxxxx, a soldier who recently lost his life. Private xxxxx is under your feet in the cargo hold. Escorting him today is Army Sergeant yyyyy. Also on board are his father, mother, wife and daughter. Your entire flight crew is asking for all passengers to remain in their seats to allow the family to exit the aircraft first. Thank you.”

We continued to the gate, came to a stop and started our shutdown procedures. A couple of minutes later I opened the cockpit door. I found the two forward flight attendants crying, something you just do not see. I was told that after we came to a stop, every passenger on the aircraft stayed in their seats, waiting for the family to exit the aircraft.

When the family got up, a passenger started to clap his hands. More passengers joined in and soon the entire aircraft was clapping. “God Bless you,” “I’m so sorry,” “Thank you” and other kind words were uttered to the family as they made their way down the aisle and out of the airplane. They were escorted down to the ramp to finally be reunited with their loved one.

Many of the disembarking passengers had tears as well and thanked me for the announcement I had made. “They were just words,” I told them. “I could say them over and over again, but nothing I say will bring back that brave soldier.”

Opportunities to show this kind of empathy and kindness toward others abound in daily life. All too often, however, we fail to notice them and they quickly pass by.

Sometimes it’s because we don’t notice or understand what’s going on right in front of our eyes. We can counter this weakness by improving our ability to read the words, tone of voice, facial expressions and body language of other people, just as the pilot in this story read the desperation in the flight attendant’s voice when she asked him to help this grieving family.

Another reason we fail to show kindness is that we don’t understand how other people are feeling as they face difficult life experiences. We can counter this weakness by deliberately cultivating and practicing our natural capacity for empathy and compassion, just as the flight attendant and pilot did when they felt the grief of this family and moved to console them.

A third reason we fail to show kindness is that we are simply not aware of hidden opportunities to do so because we don’t have the information we need. We can help one another in this area by learning when and how to appropriately share information about other people’s struggles, just as this flight attendant and pilot did. They thoughtfully informed a widening circle of people of their opportunity to join together in showing kindness. That circle grew to include the team at flight control and all of the passengers on the aircraft, who rose to the occasion to do whatever they could to comfort and encourage this family.

I hope you will join me in cultivating the relational qualities that enhance kindness: other-awareness, empathy and compassion, and wisdom to know when and how to inform others of opportunities to join together to multiply the gift of comfort and kindness (see practical suggestions below).

At the same time, please join me in praying for the thousands of people in our armed forces who serve us so sacrificially every day, and for the many families who have lost loved ones in service to our country.