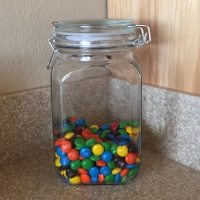 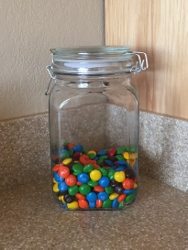 My wife seemed to be testing my resolve.

A month ago I decided that it was time to do battle with my love for candy. That meant not slipping into the pantry two or three times a day to raid the jar of M&Mâ€™s we keep for our grandson.

I was doing great for three weeks. Iâ€™d actually begun to forget the jar was even there. But last week Corlette moved it out onto the kitchen counter. Now I see it every time I walk by. The battle has entered a new phase â€¦

In last weekâ€™s blog post I set forth seven basic principles of habit change. The first principle was that every habit has three parts: a cue, a routine, and a reward.

A cue is what triggers the habit cycle. Cues move us unthinkingly into a programmed set of actions (routine) that result in some kind of pleasurable outcome (reward). A habit becomes ingrained when we repeat the cycle and experience the reward so many times that we begin to expect and crave the reward as soon as we experience the cue. 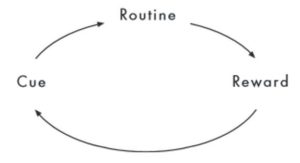 For example, afternoon restlessness or lethargy might move us to wander into the kitchen or coffee room and eat unhealthy food, which triggers neurotransmitters that give us fleeting pleasure.

Similarly, boredom might cause us to glance at our smart phone or skim recent emails, which activates the same neurotransmitters and feeling of reward.

In the same way, being mistreated by others or hearing about a friend or colleague who just got married, pregnant, or promoted might cause a cycle of sinful bitterness, envy or self-pity, which can fuel a similar neurological response and a perverse pleasure.

There are countless other habit cycles that we unthinkingly follow every day, from the way we brush our teeth, to the route we drive to work, to the way we respond to criticism or correction. Some of these habits serve us well, but others undermine our health, our relationships, our careers, and worst of all, our walk with God.

Break the Cycle with a New Routine

The second principle of habit change is that you can change an undesirable habit by keeping the cue and reward but learning a new routine.

If you feel restless or sluggish, taking fifteen minutes to walk around the block can give you a mental and emotional lift â€¦ without adding unneeded calories to your diet.

If you feel bored, you can change your focus for a few minutes by mediating on a Scripture youâ€™re memorizing or by walking down the hallway to find out if a co-workerâ€™s mother is out of the hospital â€¦ which will lift your spirits as well as those of your co-worker.

And if othersâ€™ disappointing behavior or success tempts you to bitterness, envy or self-pity, you can replace those routines by lifting those people up in prayer, by dwelling on what is commendable in their lives as image bearers of God, or by rejoicing in the many blessings the Lord has bestowed on you (Luke 6:27-28; Phil. 4:4-8).

Some of these substituted routines can trigger rewards similar to those produced by the replaced behavior. When that is not the case, Iâ€™ve found that I can stimulate a reward sensation by doing a â€œmental celebrationâ€ of my victory over the old routine.

For example, Iâ€™ve developed two routines to replace opening the M&Mâ€™s jar. One routine is to walk to the sink and drink a large glass of water. The other is to eat a piece of fruit or a couple of baby carrots. Neither routine gives me a â€œchocolate buzz.â€ To make up for this deficiency, I mentally celebrate my victory, stirring up a sense of triumph that helps to make the new routine more and more rewarding.

A third principle is that habit change builds momentum if you can change a single â€œkeystone habitâ€ and then continue to build on consecutive â€œsmall wins.â€ Avoiding M&Mâ€™s is not a big accomplishment all by itself. But the series of small wins Iâ€™ve experienced by walking by the jar several times a day has inspired me to take on other habits.

For the first time in years Iâ€™m not treating myself to a bowl of cereal just before bedtime. Nor am I indulging high-carb snacks during the day or second portions at dinner â€¦ none of which I need. Combine that with more consistent exercise, and Iâ€™ve lost ten pounds in less than a month.

These wins inspired me to go after the time-wasters in my life. I no longer pull up my electronic solitaire game when Iâ€™m bored. I only check my news Apps twice a day. I turn off my email program when Iâ€™m concentrating on a writing project. I no longer channel surf â€¦ to the utter delight of my wife.

Yes, these are all small wins, but they are leading to bigger wins.

My morning devotions are richer and more consistent. As I spend more time in Godâ€™s Word and in prayer, his grace is impacting other areas of my life. Most importantly, Corlette and I are spending more time talking about our relationship â€¦ which is helping me to make some long overdue changes in the way I care for her.

For example, Iâ€™m a natural problem solver. When clients walk into my office with a relational, spiritual, business or legal problem, they are usually thankful for how I listen to their concerns, gather essential information, and quickly help them to find effective solutions.

Itâ€™s taken me far too long to realize that my wife doesnâ€™t enjoy being treated like a client.

She admires how quickly I can help other people solve their problems, but thatâ€™s not how she wants me to treat her. She wants me to take more time to listen to her, to truly understand her feelings, and to show greater empathy and compassion.

Once that occurs, Corlette often figures out solutions to her concerns without my advice. If not, my counsel is far more welcome when she knows Iâ€™ve cared enough to really listen.

As Iâ€™ve prayed for Godâ€™s help, this new routine of listening longer and deeper is steadily replacing my old routine of offering solutions as soon as I see them. I still revert to old habits when Iâ€™m tired or stressed, but the overall trend is clearly positive.

As God helps me to grow in self-awareness and self-engagement, Iâ€™m learning to manage the â€œcue, routine, rewardâ€ cycle more successfully every day. As his transforming work continues, I look forward to going from one small win to another.

PS: I asked Corlette about the M&Mâ€™s, and she assured me that she hadnâ€™t move them to the counter to test me. She simply needed more space in her pantry. She offered to put them back, but I said no â€¦ Iâ€™m actually enjoying my little celebrations every time I walk past them.

PSS: The next post in this series isÂ Idolatrous Habits.