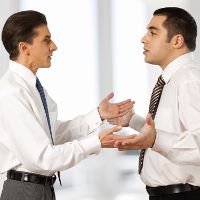 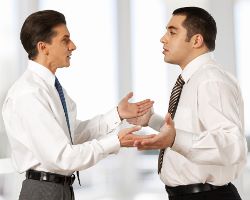 I love it when ordinary Christians use simple biblical principles to solve relational problems that have stumped corporate presidents and highly trained professionals.

Thatâ€™s exactly what a woman named Diane did when two coworkers were about to lose their jobs. Here is the testimony she shared with me.

I recently learned about two scientists in my company who were going to be terminated because of their unwillingÂ­ness to work together. These men had collaborated on many projects with great success and had been very close personally. But theyâ€™d had a falling out a while ago and were moved to different departments.

A couple of weeks ago a multimillion dollar project was offered to the company. It would require these two men to work together. Our president asked them to submit a joint proposal, but both refused. He said they would lose their jobs if they couldnâ€™t overcome their differences. They wouldnâ€™t budge, even after our human resources folks tried to get them to cooperate.

When I heard about the problem, I had a sense that God wanted me to do something. But since neither the president nor our HR folks could budge them, I didn’t see any way I could help. Besides, Iâ€™m a computer specialist, not a counselor. This was way out of my league.

But Iâ€™d just studied your material in my church, and God kept nudging me to put the principles into action. So I finally asked our president if I could try to help. To my surprise he said, “Go ahead; what have we got to lose?”

I knew each of the men personally since Iâ€™d worked on their computers. So when I asked if I could talk with them about the situation, they agreed.

Through individual conversations I gained an insight into the cause of their falling out. A previous supervisor had been jealous of their close relationship. As a result he deliberately fed each man’s pride and planted critical ideas about the other. This is what had driven them apart.

When the three of us met to talk, the tension between them was tangible. I started by recalling all the success of their joint efforts over the years. They softened just a bit but would still not look at each other.

I then began to help them see how their supervisor had manipulated them. I asked questions about what the supervisor had said and about what each of them had done and felt. The hurt began to spill over, but for the first time they looked each other in the eye.

As I gently showed how the supervisor had come between them, they continued to soften. They began to talk directly with each other and finally saw what had happened. Each expressed regret that he’d believed the worst about the other without directly discussing their tensions.

As their attitudes softened, I guided them through 7-A confessions and the four promises of forgiveness. At the end of the meeting, they actually embraced.

They soon submitted a joint proposal for the big contract. When it was accepted, they began working together again. As others in our company heard about the reconciliation, they approached me to ask about it. Iâ€™ve had more opportunities to share the gospel in the last few months than Iâ€™ve had in years!

And it didn’t stop there. A few months ago, one of the scientists learned that his son was getting a divorce. The father shared with his son and daughter-in-law the principles he had learned in our meetings. By God’s grace, the couple has dropped the divorce and begun attending a local church.

You never know how far the ripples will go from a single pebble tossed into the water, but you have to be willing to toss the pebble! Thanks for showing me how to restore broken relationships!â€

There are people around you who will need the same kind of help someday. If you’d like God to use you like he used Diane, this summer would be a great time to upgrade your relational skills. Take a look at our Discovering Relational Wisdom 2.0 course, which is available online for individual or group study.

Corlette and I did this study with our children (24 and 21). We did the daily journaling individually and then met on Sunday afternoons to discuss our personal insights, applications, and prayer needs. Each of us is now finding daily opportunities to practice these concepts with one another, with friends and members of our church, and with coworkers.

You could use the same study approach this summer in your family or with a Sunday school class or small group study. As you grow in relational wisdom, you can follow Dianeâ€™s example of stepping into the gap when others need help with their relationships … whether at work, at church or at your evening dinner table.

PS: For other ways that relational wisdom can improve job performance and advancement, see Why Relational Families Produce Better Employees.