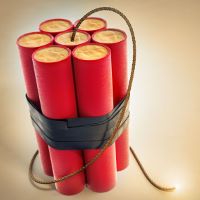 Have you ever been in a meeting that was about to explode?

You could feel the tension building with each personâ€™s comments and knew it was just a matter of time before the dynamite went off.

It might have been a conversation with your spouse or teenager. Maybe it was a staff meeting at the office. Or, sometimes most volatile of all, a congregational meeting at your church.

Well, I just learned a new way to “de-fuse” this kind of dynamite.

Bill and Peggy White, two of our most active Certified RW Instructors, drove from Florida last Friday to lend support at a seminar I taught in Nashville. During dinner Friday night, they described a tense meeting at a Christian school in their community. About fifty parents were gathered together to voice grievances.

The pastor who led the meeting was a seasoned veteranâ€”combat-tested not in Afghanistan but in his local church. He knew how quickly such meetings can escalate into harsh accusations and demands for termination.

So at the beginning of the meeting, he briefly summarized the problem they were there to discuss. Once he got agreement on the issue people wanted to address, he set forth one simple ground rule: anyone who wanted to speak had to follow the same format by answering five questions in a specific order:

Five simple questions that helped people to become more self-aware and other-aware by empathizing with one another, recalling their shared frailty, getting the logs out of their own eyes, showing respect and accepting responsibility, and by being solution-minded rather than attack-oriented.

Try it the next time youâ€™re faced with a tense conversation, whether at a congregational meeting or with two squabbling children.