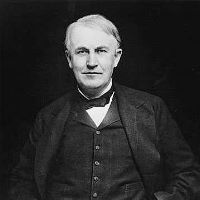 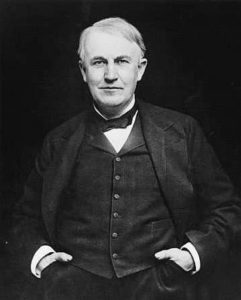 Thomas Edison never claimed to be a Christian, but he did a better job of demonstrating forgiveness than many believers do.

When Edison and his staff were developing the incandescent light bulb, it took twenty-four hours to manufacture a single bulb. One day he handed a new bulb to a young errand boy and asked him to take it upstairs to the testing room.

As the boy turned and started up the stairs, he stumbled and fell, and the bulb shattered on the steps. Instead of rebuking the boy, Edison reassured him and then turned to his staff and told them to start working on another bulb.

When it was completed a day later, Edison demonstrated the reality of his forgiveness in the most powerful way possible. He walked over to the same boy, handed him the bulb, and said, â€œTake this up to the testing room.â€

Imagine how that boy must have felt.

He knew that he didnâ€™t deserve to be trusted with this responsibility again. Yet, here it was, being offered to him as though nothing had ever happened. Nothing could have restored this boy to the team more quickly, more convincingly, or more fully.

Are You Being Outwitted by Satan?

How much more should those of us who have experienced reconciliation through Christ be quick to use visible, personal actions to demonstrate forgiveness and restoration!

This is what the Apostle Paul taught the Corinthians after they had disciplined a member of their church. When Paul learned of this manâ€™s prolonged censure, he exhorted the elders to immediately and publicly forgive and restore him:

This punishment by the majority is enough, so you should rather turn to forgive and comfort him, or he may be overwhelmed by excessive sorrow. So I beg you to reaffirm your love for him … so that we would not be outwitted by Satan; for we are not ignorant of his designs (2 Cor. 2:6-11).

The word translated as â€œreaffirmâ€ in this passage means â€œto make valid, ratify, or impart authority or influence.â€ Thus Paul was instructing the elders of the Corinthian church to formally declare with explicit words and visible actions that this repentant brotherâ€™s sins were forgiven and that he was to be fully restored to body life.

Paul adds a sense of urgency to this teaching by reminding the Corinthians that Satan is always looking for ways to outwit the church by playing on strained relationships.

Sadly, both then and today, individual Christians and entire churches often play right into our enemyâ€™s hands. Wanting to look spiritual, we say we forgive others, but all too often we donâ€™t follow up with actions that demonstrate a desire for a genuinely restored relationship.

Instead, we hold others at a distance, either out of insensitivity or to continue their punishment or to force them to prove their repentance or earn our forgiveness. Before long, many of them give up hope of genuine reconciliation and drift away, giving Satan the satisfaction of another fractured Christian relationship that discredits the gospel (John 13:34-35).

Edisonâ€™s example of forgiveness is admirable, but Jesus far outshines him, not only in the transcendent, eternal price and impact of the gospel but also in very practical, personal ways.

In perhaps the best known parable Jesus taught, the prodigal sonâ€™s father runs eagerly toward his boy at the first sign of repentance, throws his arms around him, and lavishes him with every visible sign he can think ofâ€”hugs, kisses, robe, ring, fattened calf, community banquetâ€”to publicly prove and proclaim their fully restored relationship (Luke 15:20-24).

In a far more astonishing and personal example, Jesus publicly restored Peter (who had denied Jesus three times at his most desperate hour) by reaffirming his apostolic position and special calling to lead the building of the church (John 21:15-17).

These examples, parables, and commands give us a clear path to follow.

So the next time you have the opportunity to forgive someone who has repented of a wrong, look him in the eye and with genuine warmth and love speak these hope-giving words, â€œI forgive you.â€

And then back up your words with actions.

Whether you embrace or shake a hand, offer a material gift (robe or ring), host a family meal or public celebration (fattened calf), or publicly reaffirm someoneâ€™s gifting and calling (light bulb or ministry), make every effort to restore the relationship in a way that fulfills God’s command to “forgive each other just as in Christ God forgave you” (Eph. 4:32).

6 Responses to "Forgive Like Edison, or Better Yet, Jesus"