What You Can Do About Ferguson 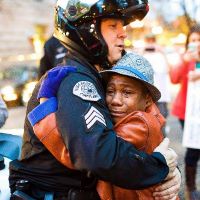 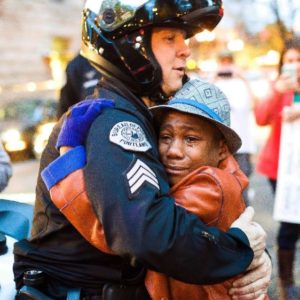 A tender-hearted, 12-year-old boy has shown that God can use the tragic events in Ferguson, Missouri, to move people to a deeper level of understanding, compassion, and connection.

The boy, Devonte Hart, was holding a sign offering â€œFree Hugsâ€ during a Tuesday march in Portland, Oregon, in response to the grand jury’s decision not to indict Officer Darren Wilson in the death of Michael Brown.

Portland police Sgt. Bret Barnum approached Devonte, extended his hand, and asked why he was crying. The boyâ€™s response about his concerns regarding police brutality towards young black kids was met not with defensiveness but a gentle, â€œYes, I know. Iâ€™m sorry. Iâ€™m sorry.â€ The officer then asked if he could have one of Devonteâ€™s hugs.

Barnum later said he approached Devonte â€œnot as an officer, but just a human beingâ€ when he saw him crying.

There Is Real Pain in Our Land

I needed to see this picture and hear this story.

Iâ€™ve watched so many hours of news reports on the events in Ferguson that I was growing emotionally numb. Devonteâ€™s tears reminded me that thousands of people continue to feel deep pain, fear, and confusion because of the ongoing racial, social, cultural, and political tensions in our land. These concerns are vividly summarized in an email I received over the weekend.

I’m 35, married, and a person of color.Â I’m also a Christian.Â As recently as 1997, my high school held two separate proms.Â In the 3rd grade, my friend told me that her mom said that we could not play together anymore because I was black. While shopping, I walked by an elderly lady and she clutched her bag.Â I’ve been followed by store clerks. I’ve been called a black b—- by a white man in traffic for moving too slowly. My grandfather’s uncle was lynched for looking at a white woman.Â It was common knowledge that a local farmer killed him.Â No trial, no arrests, no suspects. I was hurt by these people but God has enabled me to forgive them.

I attend a predominately Anglo church in the heart of the Bible belt on purpose every Sunday.Â  I can’t help but wonder why a single prayer wasn’t lifted during corporate worship for the Lord to intervene in the hearts of men related to Ferguson in the same way that we pray during election season or other tragedies around the globe.Â I know my pastor is a genuinely loving man.Â I’m not angry with him … just concerned.Â  He is a wonderful teacher and friend.

I believe that Jesus died for the sins of the racist, the prideful militant, and the one who cannot shake exploding emotions when news like Ferguson or of Travon Martin, or any other black/white issue erupts.

At the same time I wonder, does white privilege exist in America?Â  Is it a structure–a power or principality (Eph. 6:12)? If it does exist, how do Christians respond to it?Â  Certainly we don’t tell others to just â€œget over it.â€ How do love and justice work in harmony?Â  How do I resist the temptation to make an assumption that an issue is racially charged when blacks and whites are in conflict?Â  How do I disconnect my own racial/ethnic history and experiences from similar contemporary issues that are still on-going?Â  How am I to think soberly about race in America when so many tensions and issues exist?

I’m not even sure that any of this is making sense, but I’m trying to express some hard things I struggle with.Â I believe the gospel informs every area of life.Â I’m just not certain as to how to begin to apply it when there is so much polarization among Christians on tough issues like these.

I am amazed at the humility and forgiveness this woman has modeled. I doubt I would respond this graciously to such treatment. Would you?

The fact is that I have been largely insulated from these kinds of experiences. Therefore I still have much to learn. So I offer the following thoughts only as a step forward in following the example set before us by this woman, by Devonte, and by Sgt. Barnum.

Prejudice Is a Reality in a Fallen World

Iâ€™d like to believe that I am open-minded and unprejudiced â€¦ but Iâ€™d be deceiving myself.

Prejudice and bias based on race, social or economic status, and political viewsâ€”these sins are woven deeply into the human heart, into my heart. They entered the world at the fall. They are evident throughout the Old Testament (Gen. 1:8-11). And they promptly tainted the first New Testament churches (Acts 6:1; Gal. 2:11-13).

Church-sanctioned racism supported slavery in the U.S. (and also championed its abolition), and state-sanctioned doctrines of ethnic superiority fueled World War II, leading to the deaths of over fifty million people.

Although western societies now renounce overt racism, various forms of prejudice still taint our daily lives. Scientific research shows that people notice and interact on the basis of not only race but also gender, social and economic status, and physical appearance.

And it starts early. According to Howard Ross, author of “Everyday Bias,â€ babies as young as three months can exhibit a preference to be around people of their own race.

We donâ€™t automatically shake these tendencies as we grow older. As Paul DeYoung writes in United by Faith, most Christians still prefer to worship with people from their own race. A study conducted at Brigham Young University showed that white NBA referees call more fouls on black players, and black referees call more fouls on white players. Another study showed that recently released white felons have greater job hunting success than young black men with no criminal record.

As Howard Ross puts it, â€œHuman beings are consistently, routinely and profoundly biased.â€

The Gospel Has the Power to Tear Down Walls

The early church was infected with these tendencies. From its earliest days, it had to wrestle with racial, ethnic, and religious walls that had grown for centuries. But Jesus came to pull down these walls. As Paul writes in Ephesians 2:14-16, 22:

â€œFor [Jesus] himself is our peace, who has made us both one and has broken down in his flesh the dividing wall of hostility by abolishing the law of commandments expressed in ordinances, that he might create in himself one new man in place of the two, so making peace, and might reconcile us both to God in one body through the cross, thereby killing the hostilityâ€¦. In him you also are being built together into a dwelling place for God by the Spirit.â€

These were not empty words. Although the early church frequently struggled with residual prejudices, God gave them grace to overcome these divisions and steadily build a community that was so remarkably united that it captured the attention and favor of the surrounding world (see Acts 6:1-7; Gal. 2:11-14; Acts 2:42-47).

The gospel of Christ highlights many of the principles that are essential to this kind of genuine community:

Practical Steps You and I Can Take Today

These spiritual truths require a concrete response on our part. Although the events in Ferguson were fueled by many factors, including social, cultural, and political differences (which I believe some people deliberately distorted for selfish ends), there can be no doubt that racism was a primary factor in many people’s minds. Here are a few suggestions about what you and I can do to address that particular factor, beginning today.

In short, we all need to exercise a much greater level of relational wisdom as we face these challenging but surmountable issues.

Specifically, we need greater God-awareness so we can understand his design and intentions for our racial diversity and how the gospel reveals a path to healing and reconciliation, both with God and one another.

Each of us also needs a higher level of self-awareness, both to see our own unique giftedness and calling, as well as to face and battle our hidden prejudices.

Finally, we need Godâ€™s help to become more other-aware: to see and celebrate the differences God has built into the human race, to understand the struggles and burdens that those differences sometimes bring to others, and to personally act to alleviate that suffering, fight injustice, and love others as Christ has loved us.

I know these steps are only a beginning, yet for many of us they will still be challenging. But if 12-year-old Devonte and Sgt. Barnum can reach across this divide, so can we.

4 Responses to "What You Can Do About Ferguson"