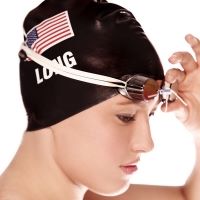 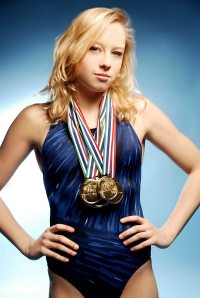 Jessica Long was born in Siberia … without legs. Left at a grim orphanage as a baby, she’s gone on to win twelve gold medals. I’d give her a thirteenth, in relational wisdom.

Born as Tatiana Kirillovain 1992, Jessica was placed in an orphanage because of her birth defect. She was adopted by Beth and Steve Long, who brought her to Baltimore and taught her how to walk with prostheses. Soon she was enjoying gymnastics, basketball, cheer leading, ice skating, biking, running and rock climbing.

But swimming was Jessica’s true joy. At 12 years of age, and the youngest athlete on the U.S. Paralympic Swim Team, she won three gold medals in Athens, Greece. She’s been adding medals ever since, along with twenty world records.

Jessica was featured in an NBC Olympic documentary on February 21, 2014, which is summarized in this short YouTube video. In addition to being a professional swimmer, she is a model, motivational speaker, and advocate for children who are adopted or have disabilities.

In the process of becoming a sports champion, this remarkable young lady models the six core qualities of relational wisdom.

Values-Awareness (remember) is your ability to honestly identify your true personal values.

One of Jessica’s “Five Keys to Success” is Faith: “I am a Christian. I believe God has a plan for everyone. I believe God had a plan for me to be adopted from Russia, to come to the United States and become a Paralympic swimmer. Part of His plan is for me to inspire people, whether they have a disability or not.”

Values-Engagement (faithfulness) is your ability to consistently apply your values in real life.

As a highly respected sports celebrity, Jessica delights to use her public visibility to serve, encourage and inspire others.

Self-Awareness (humility) is the ability to honestly discern your own emotions, thoughts,  values, interests and abilities.

Jessica is remarkably humble for such an accomplished athlete, and constantly credits God, her family, and her coaches for her success. She is also keenly aware of the many opportunities she has to demonstrate how to use disabilities as springboards for stretching ourselves to do things we never thought possible. As a result, she is a role model to thousands of disabled and adopted children in both the U.S. and Russian.

Self-Engagement (discipline) is the ability to manage your thoughts, emotions, words and actions constructively.

Determination is another of Jessica’s keys to success: “When I was young, I saw these kids going up this hill at a park near our house. For those kids, it was easy. But for me, my legs didn’t move like their legs did. I had trouble walking on anything that wasn’t level. I said to myself, “I am going to get up that hill!” I spent that whole day working on getting up that hill until I could do it. I kept falling down, again and again. But I got to the top of that hill. I could do something that those kids could do – that kids with legs could do.”

Other-Awareness (compassion) is the ability to understand and empathize with the experiences, emotions, values and interests of others.

In 2012, a Russian reporter did a story on Jessica’s adoption. During the interview, her birth mother shared how guilty she felt about the adoption, saying “What a worthless thing am I?” When Jessica heard this report, she responded by saying, “I’m not angry with her. I want to meet her. I know that one day I will have a family and would like to call my daughter Natalia, the name of my Russian mother.”

Other-Engagement (service) is the ability to love, encourage, serve and resolve differences with others in a mutually beneficial way.

Wanting to dispel her birth parents’ guilt over her adoption, Jessica flew to Siberia in December of 2013 to meet them. During this warm reunion, she reassured them of her love for them and her belief that they made the best decision for her. She was also eager to share her faith with them and give them a Russian language Bible. Describing the meeting on Twitter, she posted a picture of her family and wrote: “Meet my Russian family. I love them more than words can say. My heart is so full.”

I was both humbled and inspired as I read Jessica’s story. She has faced hurdles far greater than anything I’ve ever experienced, and she has turned those hurdles into opportunities to inspire people around the globe and to point them to the worldview and values that have guided her.

So today let’s learn from her example. Let’s take whatever challenges come our way and use them as opportunities to share our values with others and encourage them to see the obstacles in their lives as a path to deeper understanding and personal growth.